1 in stock (can be backordered)

The Talmud is a central text of Rabbinic Judaism. It is also traditionally referred to as Shas (ש״ס), a Hebrew abbreviation of shisha sedarim, the “six orders”, a reference to the six orders of the Mishnah. The term “Talmud” normally refers to the collection of writings named specifically the Babylonian Talmud (Talmud Bavli), although there is also an earlier collection known as the Jerusalem Talmud, or Palestinian Talmud (Talmud Yerushalmi). When referring to post-biblical periods, namely those of the creation of the Talmud, the Talmudic academies and the Babylonian exilarchate, Jewish sources use the term “Babylonia” from a strictly Jewish point of view, still using this name after it had become obsolete in geopolitical terms.

The bulk of tractate Kiddushin discusses the laws of betrothal and marriage, as well as the laws of Jewish lineages. It consists of 4 chapters. 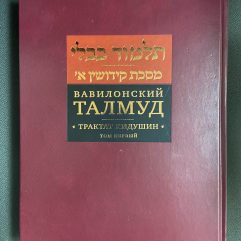