2 in stock (can be backordered)

A guide to character development, Orchos Tzaddikim, written approximately 500 years ago by an anonymous author, is considered a classic among the timeless books of mussar.
~

Most of the book is not original writing; it is following the order of “The Improvement of the Moral Qualities” by Solomon ibn Gabirol, adding paragraphs from many of Maimonides’ works, and ideas from the famous ethical writings “Shaarei Tshuva” (by Rabbenu Yona of Gerona) and Chovot HaLevavot.

The Orḥot Ẓaddiḳim, which was designed to be a very popular code of ethics, contains the following maxims among others:

In ch. xxvii. the author bitterly attacks the pilpul method of study, reproves his countrymen who engage in this method of Talmud study, and reproaches those who neglect the study of the Bible and of all sciences. 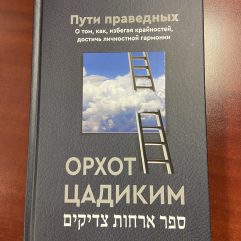 You're viewing: Ways of Righteous, Orchos Tzaddikim $40.45
Add to cart
Skip to content